Even without anything other than reinstalling OS from provider templates and custom kickstart file, few Microtic servers managed to get into a state when every other boot ended up stuck at this screen. 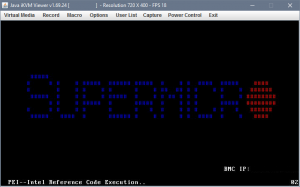 I didn’t find any memory issues. Since reboot != poweoff & poweron so an actual shutdown an power on a minute later fixed later server reboots. Just like a good old desktop.

Update 2: Or maybe not, I have no freakin’ idea…